Why Transcribing Is So Important

Think about all the great guitar plays and how they learnt... getting tabs from the internet... I don't think so. Can you imagine Jimi Hendrix using a dodgy tab web site to steal licks from Albert King? Ask any good player how they learnt and the chances are that they listened to a lot of stuff and worked out how to play what they liked on the guitar (or any other instrument for that matter). Everyone has some lessons and we all have to learn scales and stuff but developing your ear is what usually sets the good player apart. I've had the privilege of speaking to many great players about how they learned to play and all but one (Martin Taylor) have said that they have transcribed hundreds of songs.

So as a first point, great guitarists learn by transcribing.

But it goes deeper than that. When you hear a sound on a record, it goes into your ear/head. You fiddle about for ages until you work out how to make that sound come out of your guitar. It might take you a while, but you get there and next time you hear that sound you will find it pretty quickly. After doing this quite a bit it gets to the point where you can work out most songs pretty easily and quickly.

And it is not just about the notes, it about the way the note is played, how loud of soft, played aggressively or softly, behind the beat or right on. That is the stuff you can't get from tabs or anywhere else except listening. I think of music as a language and transcribing forces you to listen closely to the people you like absorb the subtle "accents" that you might not pick up with a casual listen.

And it goes deeper still. So once you can find all these sounds quickly you can take away the external source (the songs) and try to find the sounds inside yourself. Sound like crazy hippy talk? It isn't, but I know it sounds a bit weird. I believe that this is what people mean when they talk about people playing "from the heart", or "with feel" or any number of expressions that really mean - the guitarist knows the sounds he is making and they come from somewhere inside. From the head or heart don't matter, so long as it comes from inside you.

I often give new students a little test you might like to try it. Put your first finger on the 5th fret of the 3rd string (C) and play Happy Birthday, or any song you know very well. Can you do it confidently right off with no wrong notes? If you can then you may have developed a good ear/hand relationship already which is awesome. If you can't express a simple musical idea like that then you got some work to do.

Well I hope I have convinced you, I offer my personal guarantee that it is the best way to get good on the guitar. I often meet guitar players who learned by working stuff off records and know no theory at all, and they can most often play, and it sounds cool. When I meet someone who spends more time learning theory and stuff from books and tab, they might generally "know more" but very rarely can they play well. There are of course exceptions, but this is a general rule.

I have had many student that are amazed at how quickly they can learn songs and how much their playing improves in a such a short period of time, all due to a little transcribing. It is kinda tough to start off with which is why the Transcribing Course starts with very limited notes, getting you confident and giving a chance to grow the necessary skills to tackle real life examples.

There are some great players around that don't know theory or scales but can work out stuff by ear real easy, but I have never met the opposite (someone who knows lots of theory and can play great but has rubbish ears). Having a great feel (and good ears) is the most valuable skill on guitar, any good musician will tell you that.

Of course there is still a use for tab books and web-tab. They can be great for checking your work or finding out the little bit you couldn't get. They are also excellent resources for certain players that are really hard to work out (like Jimi Hendrix and Steve Vai) and can be huge time savers, but you should use them for that reason, and not because you can't work it out yourself!

The following lessons should help you make a start on transcribing and this video I shot many years ago should help all that make sense!

The above video also discusses the horrible situation in Darfur. For more information see the web links below. It really is disgusting that this video was shot in 2007 and the problems in Darfur have hardly changed. 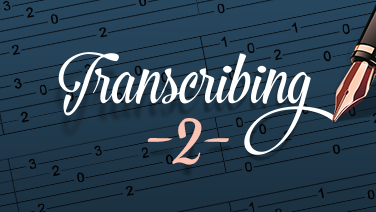