The Major Scale: Why and How

When I was growing up I thought scales were a thing that teachers used to make kids hate music. I didn't get them at all, didn't see the point and so in this lesson I want to outline the use of the major scale and why they're so important to learn - I don't want you to make the same mistakes I did!

How I discovered how to use the Major Scale.

When I was starting out on guitar I used to transcribe a lot, working out songs and solos by ear. And it was pure luck that I happened to have just transcribed the first solo in the Metallica song "Fade To Black" a few days before my teacher at school gave me the D Major Scale to learn. I was practising the scale at home (only so I didn't get in trouble!) when I noticed that all the notes in the scale were the same notes in the solo I'd just learned and I had my light bulb moment! I put on the Metallica song and tried to use the notes of the scale to make up my own solo (the same way I used the minor pentatonic to jam blues with my band) and it sounded awesome, well that's exaggerating, it was probably pretty average at best, but it worked and I made the connection between scales and real music!

Why should you learn The Major Scale?

Because The Major Scale is the foundation of all western harmony, learning play it will be very useful for improvising and for understanding solos you learn by others, and actually, you need to understand it if you want to understand any music theory at all. It's a big deal.

If you want to play anything beyond basic Blues then you will need to use the major scale and understand how to use it! There are many times that the Minor Pentatonic and blues licks just won't cut it! There are many great songs and common chord progressions which the major scale fits over perfectly but the Minor Pentatonic just sounds pretty lame on, like Wish You Were Here (Pink Floyd), Wonderful Tonight (Eric Clapton) and many others.

If you want to play Jazz you will need to learn to use Modes and for that, you'll need to be all over the Major Scale and be able to use it fluently and understand it really well.

How is it used?

Well once you know how to play the scale patterns, you use them to play (improvise) solos over the chords in the key!

What is the key?

Put really simply the key is a bunch of notes and the chords that can be made with that same bunch of notes. That is a massive simplification but it should help you get the concept. In the last lesson we looked at The Major Scale and saw it had the notes C D E F G A B and C. We also saw it had a bunch of chords that could be built using only those notes: C, F, G, Dm, Am and Em (and Bdim but we don't use that much!). These chords and scale notes together make 'the key'.

So how do the notes and chords relate to each other?

Well have a look at this chart which shows the notes in the Triads (3 note chords) and you'll see that all the chords have only notes from the C Major Scale (CDEFGABC - no sharps or flats).

How should you learn The Major Scale?

So the big mistake many people make is trying to learn too many patterns before they can use them! So I recommend learning only Pattern 1 and learning how to use it, learn where it can be used and over which chords and then get very familiar with my jamming and improvising (covered in the next lesson). My DVD Master The Major Scale gives you a comprehensive course on using it to make music with it, using just one finger, using sequence studies and reactive listening.

Before you start improvising with it, you will need to learn the pattern properly. You might like to check out my lesson on How To Practice Scales and apply those exercises.

The Major Scales are also often used for technique development. Playing scales with a metronome and developing speed is a great way to improve the synchronisation of your hands. I have a lesson about this in the technique area: Scale Picking, but it's a whole different thing to USING a scale to improvise and or make melodies. It's just about technique and making your fingers move faster and sync better!

What do I do once I can improvise in Pattern 1?

Only when you are totally confident improvising with that Pattern 1 you can explore learning more patterns, but even then you should learn just one more pattern (probably Pattern 2) and learn how to use that one on its own. Once you can make music with both of them you should practice linking them together and improvise with both of them so they almost become one big pattern before attempting to learn any more.

So can I get jamming now?

Sure you can, let's chat about that in the next lesson! 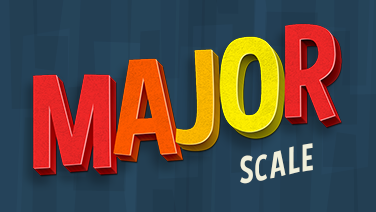