The CAGED system was not 'invented'. It is a fact. It is how the guitar works and comes directly from the tuning of the instrument combined with western harmony.

I've been meaning to add this lesson for some time, so after harassment from certain members of the forum and seeing the question asked a few times I have decided to use some time off this afternoon to get it done :) hope it makes sense to you...

You should find that after understanding this system that a lot of things make more sense and I will try and point out the most important things as we go and link to relevant lessons.

The Birth Of CAGED

As I mentioned before the CAGED system comes from combining the notes on the guitar neck with the notes of a chord. For this example, I will start with an F chord as it fits well on the neck but works with all other chords too. I will ask you to do it yourself later with other keys.

A major triad consists of the first, third and fifth notes of a major scale. If you are not sure how this works you will just have to trust me, and read up on some theory later.

In the key of F Major (F G A Bb C D E F) the triad notes would be F A and C. Lets start by finding them all on the guitar fingerboard. Notice that every note can be found on every string. On some strings the octave is shown to to help make the shapes clear later.

I would suggest if you do this yourself that you work out where each note is found on each string and then double check them. Mistakes in this kind of exercise can be a real pain.

Once you are sure you understand this bit, it's time to move onto the next lesson - CAGED - Seeing The Shapes. 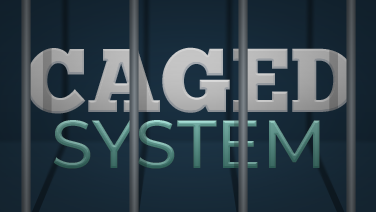