Once you have your D chord under you fingers we can start on the next chord, A. Most people will still find it takes them ages to get their fingers in the right places to play the chord and probably your fingertips will be a bit sore - but that's normal, and we'll chat more about that shortly!

Now it's time for the A Chord

The next chord we are going to check out is the A chord. 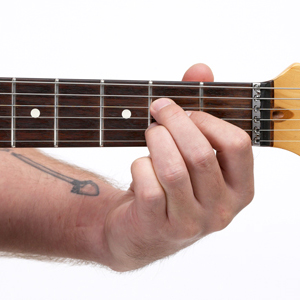 With this chord, all your fingers are at the 2nd fret.

The traditional approach (which I taught for many years) has the first, second and third fingers, all in a row in the second fret. I prefer the newer fingering where you swap around your first and second fingers so your 1st finger is placed on the third string; your 2nd finger on the fourth string; your 3rd finger on the second string. The first (thinnest) and fifth strings are played open. Don't play the thickest (sixth) string. newer method makes it so that all the fingers closer to the frets, fingers 2 and 3 are right next to it and the first finger just pushes in from behind.

You can use this audio clip to check that your chord is sounding cool.

It's normal at this stage for your fingers to be hurting really badly, for notes not to be coming out clearly, and a feeling that you might never get it. Pretty much everyone got that feeling when they started, I sure did! Just stick with it. It just takes practice.

When your fingers are not yet toughened up, the soft pads spread out and touch the strings in places they shouldn't. Sometimes you won't be able to press hard enough to get a good note. Don't worry about it—it will come—it's just going to need more hours of pain to get through to enjoying it!

So when you can put your fingers into the right places it's time to move onto the next lesson - don't expect to get to the chords super quickly, it's probably going to feel REALLY difficult and you'll feel like it's impossible - but it's not - it's just these early stages that feel SO hard! Your fingers will toughen up and get more flexible and dexterous in the next week or two!

Quick Start Guitar - 5 Minute Overview
The D Chord
The A Chord
Fun play along with A & D
The E Chord
Anchor Fingers for A, D and E
Stage 1: One Minute Changes
All Down 4 to a Bar Strumming
How To Use The Beginner Song Course
Easy Songs for Stage 1
Fun Play Along with A, D & E
JUSTIN Ear Training Exercises (S1)
Top 10 Guitar Practice Tips
Stage 1 Practice Schedule
NEXT MODULE