The Melodic Minor Scale is a Major Scale with a flat 3rd (b3) and it's used mostly in it's modal forms of the Altered Scale (Superlocrian) and the funky Lydian Dominant.

The scale formula for the Melodic Minor Scale must be memorised, as you will use it often to work out the notes or chords in the key. The formula describes the interval distances between each note of the scale.

Scales are always compared to the Major Scale to find the intervals used.

It is derived from the Major scale with a flattened 3rd but can also be thought of as a Natural Minor Scale with a raised 6th and 7th degree.

Chords In The Key

The chords in the "Key Of C Major", that is the chords that can be made using only notes of the C Major Scale are:

Shown are Triads (3 note chords) and Quadads (4 note chords), there are many hundreds more chords that can be built from this scale but these are by far the most commonly used.

Note the I chord, is a minor chord with a Major 7th, quite a dissonant one, usually a passing chord. Don't forget the ∆ means Major, - means Minor, had to use shorthand here to fit the chord names in!

Very interesting that it contains two Dominant 7th chords, the Modes from the scale that relate to each have very different flavours!

You could use the C Melodic Minor Scale to improvise over any or all of these chords! 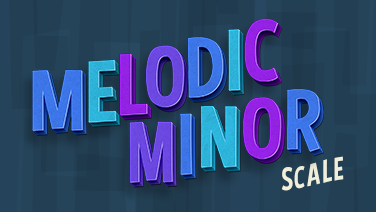