Major Pentatonic In The Blues

For many people, the first time they encounter 'making the changes' is with a Major Pentatonic Scale and I think it's a great place to start. If you wanna dig into the hardcore theory then you'll probably find my Practical Music Theory course helpful :)

Look at the diagram below (and remember the red dot would be on the 5th fret both times - the notes A) and you can see that the function of the notes is totally different even if the visual shape is the same! 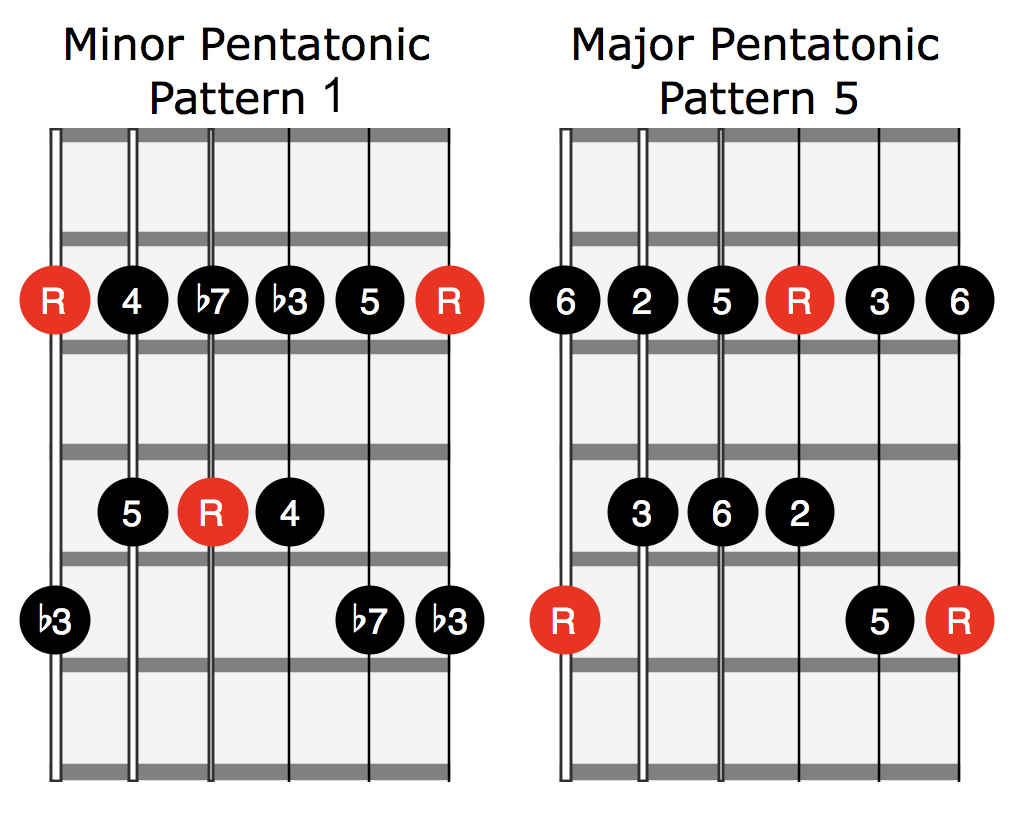 Most important is to see and hear where the root note is so...

Record a loop of the chord A (of a shuffle feel) and then try playing the minor pentatonic and then move it down 3 frets and try doing the same stuff - doesn't sound good right. But do it - try it - experience it so that it makes real practical sense!

Use the same loop of the A Chord and 're-think' it so you always stop on the root notes (5th fret on strings 6 and 1, or String 3 Fret 2) - keep returning to the note and train your ear to hear the function of the notes better!

Let's examine the notes in the scales and chords and see where they clash!

In practice the real bad awful sour note is the clash of playing a C# note over the D7 chord - it just sounds awful. You can see it in the theory but you'll hear it even more clearly and I recommend listening and playing over thinking any day of the week! :)

So over the D7 you should play D Major Pentatonic - D E F# A B (or you can switch to the A Minor Pentatonic, but we'll explore that later!)

Over the E7 you can use the E Major Pentatonic, E7 arpeggio - or get back to ripping around the Minor Pentatonic - again, more on that later - slowly, slowly catchy monkey!

In the video I sometimes mix in the 'blue note' from the Minor Pentatonic scale into the Major - we'll covering this in a later lesson - no harm in playing about with it if you want but don't stop on it - it's a passing note!

Up next we're going to be exploring a really cool Major Pentatonic Lick you can use to get used to 'making the changes' which is an incredibly useful skill to cultivate!

But before we get there I recommend you spend at least a week (5 mins a day) getting used to playing and locating the root note in the pentatonic to ensure you see it as it's own scale and not confuse the note function with the Minor Pentatonic. Loop the A Chord and just explore the Major Pentatonic and see what you find. Discoveries you make on your own will be very valuable!