Music is about sound and listening, so this part of your guitar study will help you a lot more than you will initially realize. Many people never grasp the essential technique of learning songs by ear, but I believe that it is one of the most important skills that you can develop as a musician. But it is hard! People like me, that learnt before the internet, had to be either shown a song by a friend or work it out by ear. Every single guitarist that I have ever met that I have thought to be any good had transcribed lots of songs. Transcribing is working out a song using your ear and then writing it down. This could mean working out every single note of a guitar solo, but also refers to working out the chords and rhythm patterns to play a song. This is a great skill to start developing as a beginner, rather than waiting until much later in your guitar playing career.

It is hard to just jump in at the deep end and work songs out without knowing what the possible chords are or how they might be played. So we'll start this course by playing some chords from a set palette for you to identify. This will help you realize that you can learn to do it, and I hope that by the end of the course you will be able to work out songs on your own.

It does take practice, in fact, more than we can cover here, so you will need to do some work on your own. You could try and replicate the lessons that I present here by recording yourself, waiting a few days and then trying to work out the answers, or you could get a friend to play chords and chord sequences for you to work out. I prefer this ‘jam buddy' method because it is always more fun working with another musician.

Now it is time to get your ears working

Don't forget that music is about sound and listening so this part of your guitar study will help you a lot more than you will realize initially.

REMEMBER to stop the track right after the chord you are trying to identify because...

The Last Thing You Hear, Stays In Your Ear!

Take it slow and don't expect results too quickly, it will take some time develop your listening skills.

Make sure you do ALL the exercises in each test before checking the answers!

On the CD you'll hear me play a chord – and then you have to work out what chord it is. To start with, do this by trying to find the chord on your guitar. Eventually – and this may take quite some time – you'll be able to tackle exercises like this without touching your guitar at all, as you learn to recognise the sound of each chord. For this reason, it's worth revisiting these early exercises even when you've progressed to the later stages.

The chord will be played three times. What you need to do is:

OK, now we are ready to work out some chords! So here we go - remember to pause after you hear the chord and try and figure out what chord I play. This training is really beneficial so please don't skip over it!

In this exercise you will hear some chord progressions that you have to figure out by ear. In the SSR exercises, you'll work out one chord at a time. In this exercise—and at the same point in the other stages—you'll work out a sequence of chords played one after the other, just like working out the chords for a song. The trick is to pause on each chord and try and figure it out before continuing. At this stage, I will be playing each chord for a full bar: four down-strums on each. You only have three chords to choose from, so you should find this easy enough.

You'll find the answers here :) but no cheating. 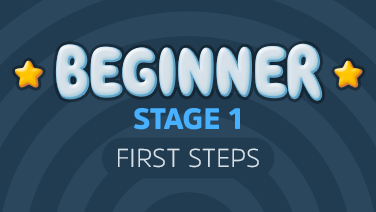 Quick Start Guitar - 5 Minute Overview
The D Chord
The A Chord
Fun play along with A & D
The E Chord
Anchor Fingers for A, D and E
Stage 1: One Minute Changes
All Down 4 to a Bar Strumming
How To Use The Beginner Song Course
Easy Songs for Stage 1
Fun Play Along with A, D & E
JUSTIN Ear Training Exercises (S1)
Top 10 Guitar Practice Tips
Stage 1 Practice Schedule
NEXT MODULE