Now you have done some hard stretches, I'll show you some little tricks to speed up your changes to and from G to make them a little smoother. It is up to you where you might use all this, but I'll offer you some suggestions. The names below are how I describe these chords; they're not official or anything!

Both this chord and the one below change very smoothly to a D chord using a 3rd finger anchor.

However, this one can sound a bit messy if you use distortion, so... 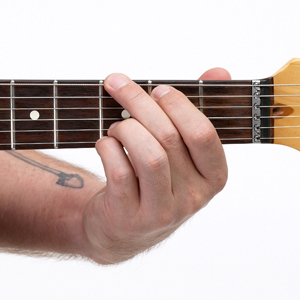 Rock G
This shape removes the note B so really it is a kind of G5 chord (it only has G and D notes; the 3rd of the chord is missing).

This one sounds great with a bit of distortion.

I use this G a lot because I don't like the sound of the B note; it just kind of makes the sound muddy to me.

This one is used by bands like AC/DC, it really rocks! Folk G
This shape changes very smoothly from a C Chord; the 2nd and 3rd finger moves over and little finger goes down. Try for yourself and see.

It also has the 5th string muted (like the version above) but you get the note B as the open second string!

You might want to use fingers 2 and 3 sometimes, depends on the circumstance, but generally you'll use fingers 3 and 4.

An little extra tip for you... If you take ‘Big' G and move your 1st and 2nd fingers down a string you end up with a really cool chord called Cadd9, which you can usually use instead of a C. It sounds awesome in songs like ‘Knockin' On Heaven's Door' (Bob Dylan or Guns N' Roses), ‘Wanted Dead Or Alive' (Bon Jovi), ‘More Than Words' (Extreme), ‘Brown Eyed Girl' (Van Morrison) or ‘American Pie' (Don McLean) and you'll find it very easy to change between ‘Big' G, Cadd9 and D because you can use a 3rd finger anchor. You will find that you can usually play Cadd9 instead of plain C is written in a song, but you have to listen and let your ears decide if it's cool or not!

We want to get these new fingerings worked in now, so time to look at more one minute changes.