Now you know your Root 5 and Root 6 Power Chords, you should totally start rocking out and learn some songs that use them.

If you play acoustic guitar you can still rock out in an 'unplugged' kind of way :)

We also made a start on some fingerstyle, so try and find at least one song that uses fingerstyle and put that into your repertoire list, it's a really great skill to get under your fingers (excuse the pun). Vincent is beautiful but WAY beyond a beginner level as I show you in detail the exact way Don played it. But never be scared to simplify a song so you can enjoy playing it.

Everybody Hurts by R.E.M is a very nice one for beginners, as is House Of The Rising Sun (which we looked at back in Stage 6!).

Play Along With Original Recordings!

Playing along with the original recordings is great fun and will help you with your rhythm feel and force you to make the chord changes faster (to keep up!) but to do this you will sometimes need to Use A Capo, a Stage 6 lesson that will be moved to Stage 1 when I next remake this course! Using a Capo means the frets will be closer together and so make it harder to cram your fingers in (especially for the A Chord) which although harder at first can also be great practice! :) I recommend getting and using a capo and playing along with the original recordings as soon as you can!

As well as playing along with the original recordings, it can be awesome fun to play along with backing tracks... and my app does just that! There are hundreds of songs (graded by difficulty) to play along with, as well as a One Minute Changes tracker, Chord Change Songs and exclusive video lessons! It's a pretty awesome tool for beginners, getting rave reviews and it's free to try out, so go have a look! Available for Apple iOS and Android!

You can always check out all the songs for each stage on the Songs page and use the Stage 8 filter Tag, but here they are for you anyways!

Dancing In The Dark - Bruce Springsteen 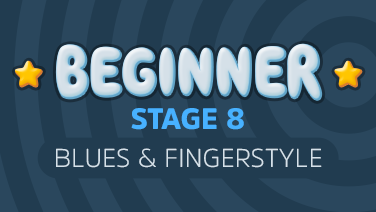