When I started on guitar, no one really explained to me why I should learn scales, and so I was convinced that they were some kind of torture device used by music school teachers to make kids hate music! Eventually I got sick of people talking about them and being embarrassed about not having a clue what they were or how they were used, so I asked my teacher to explain them. Once I got it I was kicking myself for not learning them sooner.

In this lesson I want to explain the very basics about scales and how they are used. This lesson stemmed from a great topic on the forum that alerted me to the need for this lesson. Some of these answers are simplified to help make things clear for noobs.

What is a scale?
A scale is a group of notes that sound good together. That's it! It is a group of ascending and descending notes that are used for the creation of melody. They are also the building blocks for harmony, and chords can be built from scales. There are no set rules about the notes, or number of notes, some people even make up their own scales (although that is very advanced material, and should not be approached by beginners!).

Why should I learn scales?
There are a few reasons you should learn some scales. Firstly, they are good for your fingers as a physical exercise, and will help develop your fingers strength and dexterity. Secondly, they will help you improvise (make up solos) and understand solos that you might learn, help you understand why people play the notes they do.

What scale should I learn first?
Well the most common scale to learn first is the Minor Pentatonic Scale. That's the one that I recommend that you start with and it is included in my beginners course. Once you have that one down (and can use it) then you should explore the Major Scale. There is information about The Major Scale on this site, or you could check out my Master The Major Scale series, which gives you an organised way to learn and use all 5 positions, and how to use them.

What note do I start on?
Always start and end on the lowest root note (usually on the thicker strings). This will help get the harmonic content of the scale in your head, so you hear the correct tonality of the scale. Later you can learn about Modes and learn other ways to use the scales, but starting and ending on the root note is very important.

Many of the scale shapes on this site would appear to start on the 2nd fret, but they don't! You must start the pattern on the root note for the scale you want to play (see below).

All the scales move up and down the neck and you must use the right key for the song. To understand keys, you need to do a little music theory (my Practical Music Theory series helps with this) but there is a lot of information about this on the site too, and some below!

Can all scales be moved around?
All scales (and chords for that matter) that do not use open strings can be moved anywhere on the neck. You need to know the root note though, so you know what scale you are playing!

Start by getting into the idea that your Minor Pentatonic Scale can move around the neck.

Where are the common root notes and where are the notes on the neck?
There is a lesson here that shows you the Notes On The Neck, and it is a very useful skill to have for many reasons, but you will need to know at least the notes on the thickest two strings to know where your scales can be played.

What does Position mean?
This term creates a lot of confusion, some people say that Position is where you are on the neck (eg. Playing around the 8th position would mean playing around the 8th fret) but others use Position to indicate different ways of playing the same scale [see more on this below] and there are 5 Positions in this way of thinking... playing in G Major Position 4 would mean you were playing around the 9th fret!! Very confusing, and made even more so by many people (like I used to) use both definitions!

What are Patterns and what is all this CAGED stuff?
Patterns (also called Shapes or Positions) are different ways of playing the same scale. Because of the make up of the guitar, there is nearly always more than one way to play any scale, chord, lick or whatever.

I think the best way to learn this is to take a blank neck diagram from the Blank Papers are and then copy down onto it the notes from the A Minor Pentatonic scale (A, C, D, E, G) onto the whole neck (hint: every note will be found at least once on every string). A simpler alternative is to put red circles around those notes once you print off the Notes On The Neck diagram...

Once you can see all the notes on the neck notice the way that the same group of notes can be arranged into the 5 Patterns shown on The Minor Pentatonic page. I think that should clear up a lot of things...

Then maybe you should try and do the same for the notes of the D Minor Pentatonic (D, F, G, A, C) and notice that exactly the same patterns are formed but are on different frets. That should help you get the concept of the root notes, patterns and way that scale patterns can be moved around the neck to fit in different keys!

The CAGED system explain the relationships between the notes on the guitar and breaks them down into five shapes. C Shape, A Shape, G Shape E Shape and D shape. They relate to the only five shapes that exist on the guitar. Every scale or chord fits into one of these "Shapes". Find more at this link: The CAGED System - but beginners might find this a little tricky. Don't be trying to get this until you can play and use your position 1 of the Minor Pentatonic and the Major scales.

Still confused?
TB (one of the forum mods) did a great post that can be seen here. Maybe that will help! 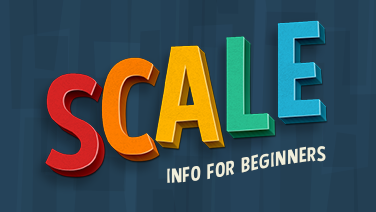 Beginners Scale FAQ
How To Practice Scales
When NOT To Learn Scales...
NEXT MODULE