As well as getting the basic chords down it is also important to check out some basic rhythm. In this lesson I will just show you a basic swing rhythm guitar pattern. I would strongly recommend you work on getting the groove on just one chord first before moving onto others.

Probably the most basic jazz pattern is playing on each beat. It's 'simple' but not 'easy' because you have to lock into a groove and make it sound and feel good - which is different to 'just being able to do it'.

This pattern is very simple, just play the notes of the chord on beat one and the 'and after two'.

Start by working on just one chord (any chord) and really try working on 'locking in' to a groove. Do practice with a metronome!

Once you have it groovin on one chord listen to the example below and then try to imitate it. It is using an A-7 chord going to a D9.

Make sure you count along - you will just play on beat 1 and the "and" after beat 2. You can also add a little hit with your fingers onto the strings on beat 2 and beat 4 for added edge, but that is not in the demo.

Note that the notes in the TAB are tied - you will only play each chord twice...

Try to practice applying the rhythm pattern (along with the basic chords) to some real song examples. 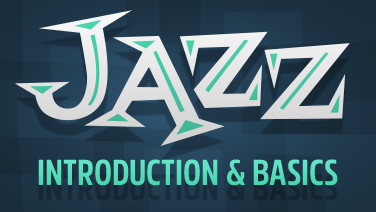