Whenever you learn a new concept or 'trick' in the Blues it's best to put it into practice and learn some of the words that use it! So in this lesson we're checking out five awesome licks that use The Blue Note including some that are staples of the Blues Language.

This lick shows one of the more common ways the blue note is used - but also check out the second bar because this is a super cool lick too! 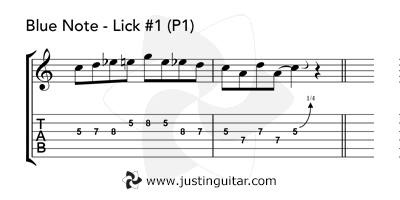 This lick starts on the blue note, runs up the minor pentatonic and then hits the blue note up top too. You could try a load of different variations on this one! 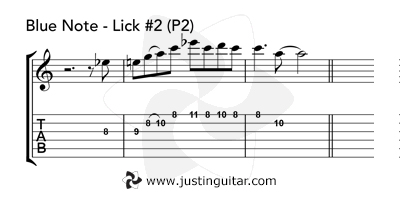 This lick is one I copped from Stevie Ray Vaughan. Learn it as written but also just experiment yourself with playing with any notes but keeping that top A note - it's a very cool trick! 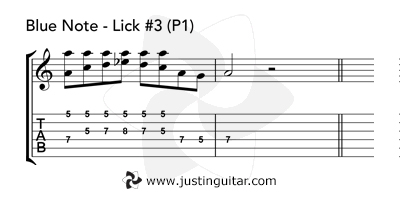 You could look at this lick as two parts, the first is quite scalular using the blue note and the second is a very bluesy lick! 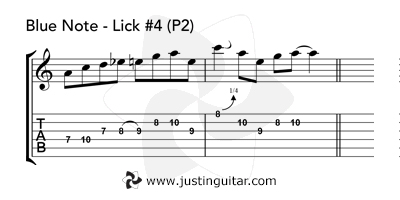 This is a 'concept' kind of lick - check out the little 5 notes grouping used in the first one (in Pattern 2), and then see how it's repeated down in Pattern 1. Try making up your own licks using this groups too! 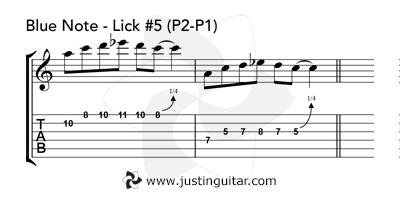 So now that you know the sound and some of the classic Blue Note words, listen out for them when you're listening to great blues solos. When you hear one you really like- maybe have a go and see if you can figure out how to play it - learning licks by ear from records is the way that nearly all the great Blues masters learned and I recommend you get into doing it as soon as you can!

So you got a couple of Patterns under your fingers now for both the Minor Pentatonic and the Blue Note, so now lets look at Linking Patterns 1 & 2

Recommended Album
Each lesson I want to recommend a great Blues album to you, make sure you are aware of the great blues music that you'll be learning on your journey. 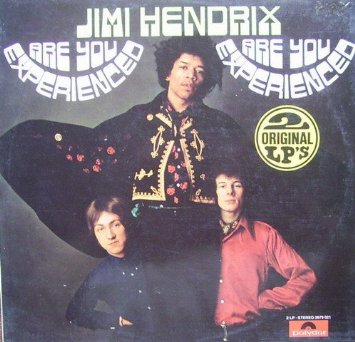 I always wonder if Jimi should be Blues or Rock, he's kinda both, and even though there are no 12 Bar forms on this album, it certainly blues based and was a huge influence on many blues guitar players (well, all guitar players I guess), and it's a must have!

Here's a sample backing track from my Jam Blues 4 collection, a Heavy Shuffle Blues in A. You jam over it and if you enjoy it, please consider buying the rest of the album, they're all great fun for jamming!

Playing the scale over the backing track and messing around exploring will help get the sound of the scale into your musical mind!.